The term “Bigfoot Skeptics” was recently coined by special interest groups among feminists, atheists, and libertarians to disparage those who pursue traditional skeptical topics instead of addressing the issues of social injustice, religion, and politics that they would rather focus on. “Bigfoot Skeptics” are seen as wasting their time rehashing trivial subjects. I’ve heard from subscribers to Skeptic and Skeptical Inquirer magazines who let their subscriptions lapse because they thought the magazines kept revisiting topics that had already been covered to the point of boredom. Bigfoot? ESP? We already know they are bogus. Been there, done that; let’s move on.

No, let’s not give up on Bigfoot skepticism just yet. A new book by Daniel Loxton and Donald Prothero demonstrates that Bigfoot skepticism is a vital and ongoing project that can foster skeptical thinking in all areas of human endeavor. Abominable Science! Origins of the Yeti, Nessie, and Other Famous Cryptids is the joint project of a paleontologist (Prothero) and a science popularizer for young readers who has always loved monster mysteries (Loxton). They use an effective tag-team approach: individual chapters are written by a single author, but their different perspectives merge into a seamless whole.

Rather than trying to tackle all of cryptozoology, they cover a few famous monster cryptids in depth: Bigfoot, Yeti, Nessie, sea serpents and Mokele Mbembe. As they investigate the evidence for each of these, a number of common themes emerge. There are lots of eyewitness accounts, fuzzy photographs, and hoaxes, but none of the type of evidence science demands. When there is material evidence like hair, a Yeti scalp, or footprints in the snow, a more credible explanation than cryptids is usually readily available. The hair, when properly examined by an expert, turns out to be either hair from a known animal or an artificial fiber. The Yeti scalps turn out to be from a goat-like animal called the serow. The footprints in the snow are from a bear or other local animal and have been distorted and enlarged by melting. A recent claim that Bigfoot DNA has been identified is flawed: the findings are consistent with human DNA mixed with DNA from one or more other mammals and are best explained by contamination in the lab. 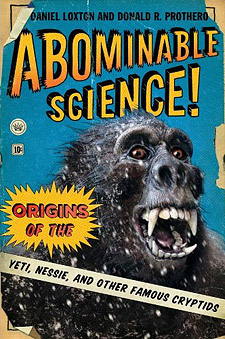 Absence of evidence doesn’t usually constitute evidence of absence, but in cryptozoology it does. It is inconceivable that such large animals could exist in so many different parts of the world without anyone having found bones or other remains. If Bigfoot covered a range large enough to provide them with sufficient food and there were enough individuals to sustain a breeding population, surely we would have some material evidence by now. Meticulous surveys have thoroughly searched Loch Ness by sonar, submarine, and dredging without finding any evidence of large animals. Elephants show up spectacularly well on Google Earth: type in coordinates 10.903497, 19.93229 and zoom in on the herd—you can even see tusks and tails. No one has spotted a Mokele Mbembe on Google Earth. And the fossil record doesn’t indicate survival of large marine reptiles like plesiosaurs past the end of the dinosaur era 65 million years ago.

Local informants have been known to tell explorers what they want to hear, to embroider eyewitness accounts, and to confuse ancient legends with modern reality. The book delves into folklore, the psychology of eyewitness and hearsay accounts, and the reasons people are attracted to hunting cryptids. It includes amusing anecdotes about the personalities and activities of both hoaxers and sincere cryptid hunters.

Nessie is imagined to be a plesiosaur that swam into Loch Ness by way of a tunnel from the North Sea; but there can be no such tunnel, because the loch is 50 feet above sea level and the water hasn’t drained out. It is a freshwater lake, and the entire area was covered by an ice sheet a mile thick during the last glaciation. Think about it.

Humans are so prone to pattern recognition that they see patterns where there are none. We know that people have seen very convincing cryptids that on closer examination turned out to be bears, tree stumps, otters swimming in a row, cormorants, harbor seals, sharks, seaweed, the wake from boats, etc. People see what they want to see, and some of them are creationists with the hidden agenda of trying to prove that humans and dinosaurs co-existed and that the whole theory of evolution is wrong.

The chapters on cryptids are preceded by a meaty chapter on how science works and what distinguishes it from pseudoscience. The final chapter discusses why people believe in monsters and why cryptozoology matters. Here the authors disagree. Loxton encourages cryptozoology as a mostly harmless “gateway drug” that can lead lovers of mystery and the natural world to grapple with the nature of scientific evidence and hopefully develop a degree of scientific literacy. Prothero discourages it as a pseudoscience that promotes anti-scientific and anti-rational thinking. It’s refreshing to see how two people with those different perspectives can concentrate on evaluating the evidence and collaborate to write such an important book.

Wouldn’t it be exciting if these monsters really existed? It’s fun to imagine, but cryptozoologists tend to fall into pseudoscience and accept unreliable eyewitness testimony. Carl Sagan pointed out that the future of humanity depends on science and technology, but that “we have arranged things so that almost no one understands science and technology. This is a prescription for disaster.”

Bigfoot skepticism is alive and well. The important insights gleaned from analyzing the evidence for and against cryptids can help us think critically about the quality of evidence in every field, from feminism to economics. We still have a lot to learn from Bigfoot, and Loxton and Prothero are excellent teachers.