MENOPAUSAL WOMEN USED TO HAVE NO ESCAPE from the sufferings of the dreaded “Change.” In the mid-20th century, they were offered a reprieve. They could take a pill to replace their missing hormones, and feel back to normal. That was good in itself, but then they found that replacing estrogens could prevent osteoporosis and hip fractures. We knew there were some risks, but we thought the benefits outweighed the risks. Some doctors recommended all menopausal women take estrogens to “stay young.” Then there was more good news: evidence seemed to show that hormone replacement therapy (HRT) could reduce the risk of heart attack, stroke, and cancer in postmenopausal women.

The optimism came to a screeching halt in 2002, when the Women’s Health Initiative (WHI) study said, “OOPS! It looks like hormones do more harm than good.” Thousands of women were scared into going off their hormones. Sales of Premarin dropped from $2 billion to $880 million. Some of these women tried other remedies and then went back to Premarin because it was the only thing that worked for them. Doctors learned to prescribe more selectively, and sales are rising again.

Now all of a sudden hormones are being touted as a miracle cure for whatever ails you. Suzanne Somers has a new book, Ageless: The Naked Truth about Bioidentical Hormones, recommending everyone take supplemental hormones, even men. My local newspaper has been advertising seminars by an MD on hormones for menopause, weight control, and romance: “Skinny Hormones, Happy Hormones, Youthful Hormones and Sexy Hormones.” Anti-aging clinics and longevity doctors are promoting bioidentical estrogen and progesterone along with testosterone, thyroid, and human growth hormone to prevent aging. What’s going on? 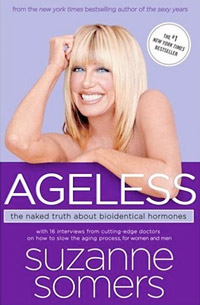 The claim is that Premarin and Provera, the drugs studied in the WHI study, are artificial and harmful, while bioidentical hormones are natural and harmless. Some also claim that bioidenticals prevent aging and the diseases associated with aging and make people feel better than they ever did before. What is the evidence behind these claims?

First we need to understand what the WHI study really said. It has been misrepresented and misinterpreted. Media reports gave the impression that HRT was killing women. Not so. Over 10,000 person-years, women on estrogen plus progestin had 7 more coronary events, 8 more strokes, 8 more pulmonary emboli, and 8 more invasive breast cancers than women who didn’t take hormones; but they also had 6 fewer colorectal cancers and 5 fewer hip fractures, and the same number of deaths overall.

So women weren’t dying because of HRT, but they were increasing their risk of some diseases while reducing their risk of others. Overall the risks exceeded the benefits. Current recommendations are to use HRT for a limited time only to control menopausal symptoms, and not to use it for disease prevention. Most of us think these recommendations will be altered in the future as we learn more about risk factors and genetic susceptibility. Meanwhile, we try to individualize advice: your doctor is more likely to recommend HRT if you are at very low risk of cardiovascular disease and at high risk of osteoporosis or colorectal cancer.

The bioidentical folks tell us that Premarin and Provera are unnatural and harmful substances cynically foisted on us by Big Pharma to make profits. They don’t seem to realize that all doctors are either women, married to women, or sons of women, who presumably are more concerned about women’s health than about Big Pharma profits, and that doctors have read all the same information they have. They recommend estrogens and progesterone from natural plant sources. Premarin comes from pregnant mare’s urine: that seems more natural to me, since we’re much more closely related to a horse, another mammal, than we are to a plant. And the plant isn’t used in a natural form; it’s used as the basis of laboratory synthesis. And there is a reason that we started giving women progestins like Provera instead of natural progesterone: natural progesterone is not absorbed well. Progestins were reliably absorbed and dosage easily controlled.

“Bioidentical” is not standard medical terminology. It’s their way of saying it is the same exact chemical compound found in the human body. But there are lots of different estrogenic compounds found in the body, including estriol, estradiol and estrone. Nothing we do is likely to replace all the estrogenic compounds in exactly the way they occur in the body. There are around 30 different estrogens in Premarin. One, equilin, is present in horses but not in women. Curiously, that “unnatural” element appears to be neuroprotective and is being studied as a possible treatment for Alzheimer’s disease. There’s no solid evidence that any supplemental mixture of hormones is ideal. Anything that has hormonal effects may have hormonal side effects, and for all we know good old Premarin and Provera may be less harmful than some other mixtures.

Compounding pharmacists make up the bioidentical remedies, often in the form of a cream. Advocates themselves recognize that there is inconsistency between pharmacies, and they may have tried two or three different compounders before they hit on one that seems to work consistently for them. In one survey, about a third of the compounded samples tested had substandard amounts of drugs. The FDA is concerned about the growing popularity of compounding and the need for better regulation.

There are hypothetical reasons to think “bioidentical” hormones should be superior to Premarin and Provera. But there are also hypothetical reasons to think that they may be no more effective and no safer. The only way to know for sure is to test them in a properly designed placebo-controlled trial. Until this is done, most of us feel more comfortable with the devil we know than the devil we don’t know.

What other options are there for hot flashes? Several other prescription drugs have been tried, including antidepressants, but they don’t work as well as estrogen and they all have side effects. A number of alternative natural remedies have been tried, from chasteberry to wild yam. According to The Natural Medicines Database there is insufficient evidence to support any of these but black cohosh, soy, and flaxseed; and these are only rated “possibly effective” and “possibly safe.” Black cohosh was the most promising — until a recent well-designed study found black cohosh no better than placebo.

Suzanne Somers and others keep harping about “balancing” your hormones. I have difficulty understanding this concept. Hormones are complicated. There are lots of different estrogens; estrogen levels are higher early in the monthly cycle and progesterone peaks later in the cycle: if you graph them, you see that each follows a curve, and the ratio between estrogens and progesterone is constantly changing from day to day and hour to hour. So what can the bioidentical advocates mean when they say they are “balancing” your hormones?

I finally realized that they don’t have any idea what they’re “balancing.” When they do lab tests, they use salivary levels, which they think are more reliable (most endocrinologists disagree). Since they know the test only reflects one instant in time, they feel free to disregard it except as a rough starting point. Instead, they have the patient report any symptoms such as insomnia, dry skin, or lack of energy, interpret those symptoms as signs of unbalanced hormones, and adjust the dosage.

It would be bad enough if they stuck to menopause, but Somers recommends hormone regimens for every age group, including adolescents, and for both men and women.

This creates a scenario where wishful thinking and testimonials take precedence over science, where quackery can go hog wild. Patients get to obsess about every little ache and sniffle, doctors get to tweak their prescriptions, and if patients don’t improve, they just say the balance isn’t quite right yet and they try again. Lots of personal attention and caring. Certainty that they have the answer to all their problems. Enthusiasm over a new method. Oh, and they combine the hormone therapy with all sorts of diet and exercise advice, and with handfuls of supplement pills, detoxifications, homeopathic remedies, and of course the FaceMaster machine that Suzanne sells and uses regularly for electrical facelifts. If you’re still not feeling perfect, you can try going to sleep at 9 PM. And sleeping in total darkness. Or add some testosterone just for the heck of it. There’s always something more to try; there’s always a satisfying explanation for everything.

The doctors who support these true believers are creating an elite following of self-absorbed, self-deluded, obsessive-compulsive health nuts. I suppose it’s nice for these people to have a hobby.

Children drink milk and they are young. Adults don’t drink much milk, and they get old. Maybe a lack of milk is what makes them age. Maybe if we give them milk, they will stay young. Maybe not.

In 1889, Brown Sequard injected himself with the crushed testicles of young dogs and guinea pigs. Early 20th century doctors transplanted goat glands. Patients in both treatments got wonderful results … which were later shown to be placebo effects. Anti-aging medicine remains a will o’ the wisp. I wish Suzanne Somers were right. I wish hormones were the answer. But the evidence just isn’t there.

Aetna, a US diversified health care benefits company, has announced that as of October 1, 2007, it will no longer cover about 25 types of “bioidentical hormones” and compounded thyroid drugs. [Coverage policy changing for hormone, thyroid compounds. Aetna Office Link Updates 4(3):6, 2007]

This article was originally published as a SkepDoc column in Skeptic magazine  13:2, 2007.