JEROME GROOPMAN’S BOOK How Doctors Think is a superb commentary on the intersection between medical science, compassionate personal interactions, and critical thinking. My only caveat is that it may be exploited by “doctor-bashers” because it shows how doctors make mistakes; but the overall impact of the book is very positive. It is a good lesson in critical thinking about any subject, not just about medicine. It shows how people make up their minds and then resist changing them, twisting or disregarding subsequent evidence to make it fit their first hypothesis. It covers a number of other common mental foibles, illustrating them with memorable clinical vignettes. Groopman cites a recent study of 100 incorrect diagnoses: only four of them were due to inadequate medical knowledge; in the rest of the cases the doctors fell into cognitive traps. He targets errors that are particularly hazardous to doctors, such as poor communication with patients, buying into fad diagnoses, bowing to economic pressures, and succumbing to pharmaceutical company influences.

Doctors may be well educated, but they are no less subject to the various cognitive biases that plague the rest of humanity, educated or not. Thus, Groopman offers several guidelines to improve performance: don’t stop thinking after you reach a diagnosis; keep an open mind so you can reconsider if new data suggest another possibility; don’t skip steps in a misguided attempt to spare your patient discomfort; guard against treating patients differently because of your own emotions or prejudices; listen to the patient’s own story and make up your own mind rather than accepting the diagnosis of a previous doctor. 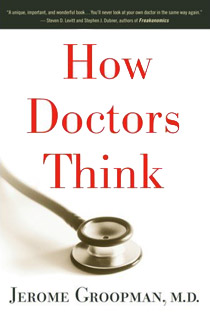 Groopman also gives practical advice to patients so they can help their doctors think better. They can offer to tell their story again from scratch to allow a fresh reassessment. They can ask, “What else could it be? Is there anything that doesn’t fit? Is it possible I have more than one problem?” If they have their own ideas about what might be wrong, or if they are worried about something the doctor hasn’t mentioned, they should speak up.

In the push towards evidence-based medicine, we encounter pitfalls. The evidence may have been derived from a group our patient doesn’t belong to. The Women’s Health Initiative showed that hormone replacement therapy did more harm than good, but it studied an older population: a later study on younger women showed that it did offer some benefits when used earlier in menopause. A treatment that is right for the “average” patient may not apply to the individual who falls on the end of the bell curve and has other co-existing health problems. This doesn’t mean we can disregard the evidence-based consensus. It means we should take the patient’s risk factors, concomitant illnesses, physiologic variants, current medications, allergies, life situation, personal preferences, etc. into account when choosing the best evidence-based option for that individual — not that we should exit the evidence-based playing field and try to invent a unique treatment for a unique patient using guesswork or intuition. Medicine is not an art, it’s an applied science; we need to make sure we’re applying it appropriately.

There is a place for clinical intuition. In an emergency, we don’t have the leisure to go through a lengthy process of weighing all the information — we have to make snap decisions to save lives. An experienced clinician may pick up on subtle clues he is not even conscious of. Of course, intuition can be misleading. Plus, medical science is messy. One clinical study is followed by another with a different conclusion. No test is 100% accurate. No treatment is guaranteed to work for every individual. Uncertainties abound.

The public believes x-rays and biopsies give clear yes-or-no answers, but that is not the case. They depend on human perception, pattern-recognition, and interpretation. Pathologists and radiologists often disagree with each other and even with themselves (in repeat readings). A radiologist who has recently missed a breast cancer is likely to over-read future mammograms in compensation. Computer-aided diagnosis may improve cancer detection but in one study it persuaded radiologists to change 10% of their correct readings to incorrect ones!

Groopman criticizes the current batch of medical students for relying too heavily on algorithms. “Clinical algorithms can be useful for run-of-the-mill diagnosis and treatment — distinguishing strep throat from viral pharyngitis, for example. But they quickly fall apart when a doctor needs to think outside their boxes, when symptoms are vague, or multiple and confusing, or when test results are inexact.” On the other hand, he shows how doctors can make mistakes by not following appropriate algorithms because they think their patient is unique and they can do better.

All too often there is no algorithm, no clear evidence-based guidance, and the doctor must make a difficult decision based on inadequate knowledge. Groopman illustrates the soul-searching, self-doubting worries that all good clinicians struggle with. How can we know we did the “right” thing if there is no “right” thing?

Groopman says, “Statistics embody averages, not individuals.” The average benefit of mammography may be less than the benefit to a woman with previous breast biopsies, a family history of breast cancer, and several other risk factors. In cancer, the evidence may show that chemotherapy improves survival on average; but it’s a gamble because it doesn’t help everyone and may shorten survival for a few. There are other considerations such as side effects, quality of life, and limitations on lifestyle. Given the same information, one patient may choose chemotherapy while another chooses no treatment, and a good doctor tries to understand and support either choice. 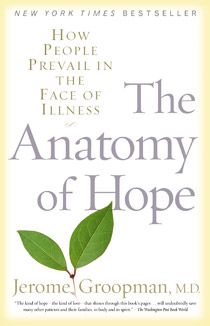 I was so impressed by How Doctors Think that I went on to read Groopman’s previous book, The Anatomy of Hope. I was even more impressed by that one. He describes his experiences as an oncologist, showing how false hope can be damaging but how there can always be real hope based on coping with reality. He tells the stories of patients who refused chemotherapy and about one who demanded even more chemo than his doctors recommended; and he helps the reader understand the thought processes involved. One woman refused treatment because she thought the cancer was her punishment for sins she had committed, one man had watched a friend die of another cancer and mistakenly thought his own (curable) cancer was the same thing. He shows how patients can live worthwhile lives “with” cancer, even when it can’t be cured. If there isn’t hope of cure, there is always hope of a better life while life lasts. I wish everyone who treats cancer, has cancer, or knows someone who has cancer could read this book.

One of the stories in The Anatomy of Hope is Groopman’s own story. He had a ruptured disc, failed surgery, and chronic back pain that limited his activities severely for 19 years. Finally he ran into a rehabilitation specialist who convinced him that the pain didn’t mean what he thought it meant. He had been avoiding any pain-inducing activities on the assumption that it was telling him his body would be harmed by those activities. He re-conceptualized the pain as meaning that he was so de-conditioned that his body had been trained to irrationally protest at normal, safe activities. With an intensive training program, he was able to build up his muscle strength and mobility again and he now leads a normal life and is pain-free.

This is a great example of how the mind influences recovery. Not woo-woo thought transfer or mind-over-matter, but proper reality-based thinking about symptoms that can facilitate appropriate treatment.

Groopman is a wise old soul. If every evidence-based medical doctor applied real science with his kind of judgment and compassion, alternative medicine might curl up and die.