The human body is clearly not the product of an intelligent designer. Its many flaws tell the fascinating story of evolution’s accidents and constraints. 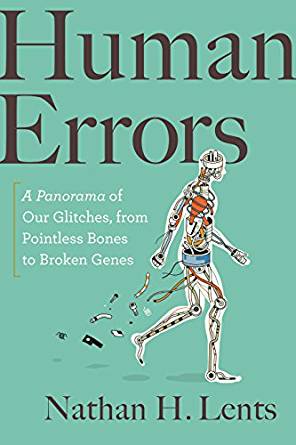 In his new book Human Errors: A Panorama of Our Glitches, from Pointless Bones to Broken Genes, Nathan Lents, a professor of biology at John Jay College, CUNY, has demonstrated that the human body can’t possibly be considered the product of an intelligent designer. Rather, its flaws tell the story of evolution. No intelligent designer would have put our retinas in backwards, left us with the stump of a tail, deprived us of the ability to make the vitamins and nutrients we need, or sent our recurrent laryngeal nerve on such a circuitous path. No intelligent designer would have filled our genomes with genes that don’t work and viral carcasses of past infections. These and our many other defects are explained only by the quirks of evolution.

Our defects fall into three categories: characteristics that evolved to facilitate our survival in a prehistoric world very different from the one we now live in, incomplete adaptations (the knee is poorly adapted to bipedal posture), and defects that are constrained by the limitations of evolution (we inherited structures that are horrendously inefficient but impossible to re-design through chance mutations). Lents says, “Human anatomy is a clumsy hodgepodge of adaptations and maladaptations.” He explains that mutations are random and often destructive but are also the source of all human greatness. He takes us on a grand tour of the human body and explains how its many imperfections came about. In the process, he teaches us much about evolution.

Pointless bones and other anatomical errors

30 to 40% of Americans and Europeans and 70% of Asians require glasses or contact lenses. Nearsightedness occurs simply because the eye is too long, farsightedness because it is too short; and presbyopia is age-related farsightedness caused by progressive loss of flexibility. Our night vision is very poor compared to that of cats.  Cephalopod photoreceptors are installed in a more logical way, but the photoreceptors of all vertebrate eyes are installed backwards; this was an evolutionary fluke that became perpetuated because re-designing it would have been next to impossible with random mutations.

Our nasal sinuses drain upward instead of downward, making us much more susceptible to colds and sinus infections than most other mammals. An intelligent designer would have taken advantage of gravity, as in other mammals.

Because of a historical evolutionary accident, our recurrent laryngeal nerve loops under the aorta, following a circuitous path that is more than three times as long as it needs to be. The error originated in fish, which don’t have necks and have a circulatory system very different from that of humans. This resulted in the absurdity of a 5-meter-long nerve in giraffes and an even longer 8-10 meter nerve in the dinosaur Brachiosaurus.

A common tube for air and food predisposes us to choking. The anatomical adaptation to upright walking never quite finished in humans: our knees, ankles, and intervertebral discs are prone to injuries. Humans have too many bones, joints that don’t flex, structures that aren’t attached to anything, and appendages that cause more problems than they’re worth. “No robot arm will ever be designed to imitate our nonsensical bone structure.”

Plants don’t eat. Cows can live on grass alone. Dogs can thrive on dog food that contains only meat and rice. Most animals can make the nutrients that are lacking in their diet. Humans can’t; they require a varied diet to supply them with vitamins and micronutrients. Humans used to be able to make vitamin C, and they still have all the necessary genes, but one of them is broken. Somewhere in our primate ancestors, the GULO gene suffered a random mutation. It didn’t affect survival because it happened in a part of the world where citrus fruits were widely available. The mutation was perpetuated and spread worldwide, leading to vitamin C deficiencies in areas without citrus fruits.

We require a long list of vitamins, minerals, and trace metals in our diet that other animals don’t need. We have contributed to our own deficiencies by ill-advised technological advances; we didn’t realize that rice polishing would remove the vitamin B and cause beriberi. Iron deficiency is common: 50% of pregnant women and 40% of preschool children are anemic, and millions die from preventable iron deficiency each year.

Wild animals don’t get fat: they live on the verge of starvation. Humans in the developed world have access to plenty of food and obesity has become a problem. Obesity is caused by overeating, something evolution has programmed us to do. It was a fine strategy for our ancestors’ hunter-gatherer societies when people gorged to compensate for periods of scarcity. “Obesity and type 2 diabetes are the quintessential evolutionary mismatch diseases, conditions that directly result from humans living in a very different environment than the one they evolved in.”

Junk in the genome

Vast expanses of our DNA have no function: they are junk DNA. 97% of human DNA is a blunder, and some of it is actually harmful. Even the functional genes are rife with errors: the DNA can be damaged by radiation or mutagens, and DNA copying errors are common. Mutations in the genes generally harm the offspring, but evolution has a blind spot. If a mutation causes harm late in life after the individual has reproduced, as in Huntington’s disease, natural selection is powerless to stop it. We have almost as many pseudogenes and broken genes as functional ones. There are tradeoffs: the recessive sickle cell gene persisted because while inheriting two copies was disastrous, inheriting a single copy protected against malaria.

8% of the human genome is made up of millions of carcasses of past infections with retroviruses, some dating back many hundreds of millions of years to our remote ancestors. A bizarre self-copying piece of DNA makes up over 10% of the genome: the transposable element Alu has infiltrated everywhere and taken on a life of its own. It wreaks havoc, but it also accidentally gave us color vision.

Humans don’t reproduce well. Ovulation is hidden, sperm cells can’t turn left, we are born too soon, and our enormous skulls cause difficulties with childbirth. Surely an intelligent designer would have developed a more efficient process.

Humans are a sickly bunch

We are prone to colds and gastroenteritis, allergies, autoimmune diseases; children are born with malformed hearts; and if we live long enough there is a 100% chance that we will get cancer. “Evolution cares little about the individuals who will die of cancer. This is a sacrifice worth making for the diversity that comes from mutations.”

The human brain can’t comprehend large numbers, we are easily fooled by optical illusions, and our memories are frequently wrong. We are frequently confused, tricked, and distracted, and we are subject to cognitive bias and confirmation bias. We fall for fallacies like the gambler’s fallacy and the sunk-cost fallacy. We are unduly sensitive to anecdotes. We have dual human natures; we are both Jekylls and Hydes. We can switch from self-sacrifice to murder in a heartbeat.

Conclusion: we are flawed but amazing

This is a fascinating, entertaining, easy-to-understand book that explains the complicated story of evolution. Lents makes it clear that the design of the human body is not “intelligent” but is full of errors produced by the constraints and accidents of evolution. Nevertheless, we manage quite well. Our imperfections are a testament to the greatness of our species because we are so good at getting around them. Where will evolution and technology take us from here? That remains to be seen.

A New Medication to Combat Obesity