A flawed study suggested that rapid onset gender dysphoria around the time of puberty might be a result of peer pressure and media influence. It raised some important questions, but Brown University succumbed to pressure from activists and removed it from its website. 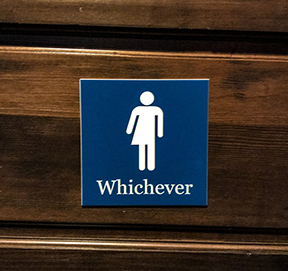 A huge kerfuffle ensued. Brown removed the news about the study from its website because of (1) concerns about its methodology and (2) concerns that the conclusions of the study could be used to discredit efforts to support transgender youth. The PLOS One twitter account was mobbed by transgender activists who disputed the existence of ROGD, and the journal promised to do a postpublication investigation. An online petition quickly garnered thousands of signatures urging Brown and PLOS One to “resist ideologically-based attempts to squelch controversial research evidence.”

Previous studies had mainly dealt with children whose gender dysphoria started in childhood. There were no studies of people whose gender dysphoria appeared rapidly around the time of puberty. One study in Finland did shed some light on the subject. In Finland, a psychiatric assessment by a specialized gender identity team is a prerequisite for legal as well as surgical gender reassignment, both of which have a lower age limit of 18. A study of patients undergoing these required psychiatric assessments at two university gender identity clinics had some surprising findings:

They found that “In the majority of the applicants, gender dysphoria presented in the context of wider identity confusion, severe psychopathology and considerable challenges in the adolescent development.”

Adolescents seeking sex reassignment represent a variety of developmental pathways differentiated by the timing of onset of gender dysphoria, psychopathology and developmental difficulties. It is important to be aware of the different groups, or developmental pathways, in gender dysphoric adolescents in order to be able to find appropriate treatment options. In the presence of severe psychopathology and developmental difficulties, medical SR treatments may not be currently advisable. Treatment guidelines need to be reviewed extended [sic] to appreciate the complex situations.

The controversial PLOS One study

Here’s how Littman described the purpose of her study:

In on-line forums, parents have been reporting that their children are experiencing what is described here as “rapid-onset gender dysphoria,” appearing for the first time during puberty or even after its completion. The onset of gender dysphoria seemed to occur in the context of belonging to a peer group where one, multiple, or even all of the friends have become gender dysphoric and transgender-identified during the same timeframe. Parents also report that their children exhibited an increase in social media/internet use prior to disclosure of a transgender identity. The purpose of this study was to document and explore these observations and describe the resulting presentation of gender dysphoria, which is inconsistent with existing research literature.

Littman created a 90-item questionnaire for parents with gender-dysphoric adolescent or adult children and recruited volunteer parents from three websites where rapid onset gender dysphoria had been described. Respondents were asked to share the link to the questionnaire with other eligible participants. 256 completed surveys were analyzed. In addition to specific questions, parents were encouraged to describe their experiences.

The study reported a mass of data. Some of the findings:

She says if these hypotheses are true, ROGD that is socially mediated or used as a maladaptive coping mechanism may harm these adolescents and young adults in several ways: non-treatment for mental health problems, alienation from parents and support systems, isolation from mainstream, non-transgender society, and the medical and surgical risks of transition.

Littman acknowledges that the study is a descriptive one designed to raise awareness of the previously unrecognized specific population of ROGD and to generate hypotheses; it was not designed to measure prevalence. To counter the possibility that the parents who responded were more likely than the average parent to have anti-transgender sentiments, they were asked if they believed transgender people deserve the same rights and protections as others; 88.2% answered “yes” which is consistent with the affirmative response in a US national poll.

Criticisms of the study

There are many things wrong with this study. The data was collected from parents who reported ROGD in their children. Studying the children themselves might have revealed that the onset was not as rapid as the parents thought, so the study really did nothing to establish the validity of the ROGD category. The sample was biased: responders were self-selected from websites that accepted the concept of ROGD. The fact that 76.5% believed their child’s gender beliefs were wrong is worrisome, to say the least. The fact that they said they support transgender rights doesn’t mean that they are not biased against transgender people in other ways. Most of the respondents were mothers; might fathers or other family members or independent observers have answered differently? Selection of participants was not systematic, and there was no attempt to provide controls or randomization. Parental reports are not reliable. Parents may not know as much about their children as they think; and indeed, 8.6% reported that they didn’t even know if their child was currently transgender-identified. There was no way to verify the accuracy of their answers. Their answers may be influenced by a desire to give the “correct” answers and by wishful thinking; I can’t believe that half of these children are “gifted.”

In defense of the study

Littman’s interest in the subject arose from anecdotal reports on social media. Anecdotes are not acceptable as scientific data, but they are useful for identifying things that are worth studying scientifically. Late-onset gender dysphoria was recognized, but ROGD seemed to be a new category. She did a study that was exploratory and hypothesis-generating. She did not accuse transgender adolescents of being pressured into following a fad; she raised questions. She said more research is needed, and she is doing more. She is currently studying parent/teen pairs where the gender dysphoria resolved in one to three years without medical treatment and she is “analyzing data from a survey of 100 people who experienced gender dysphoria, chose to undergo medical or surgical transition, and then de-transitioned by stopping hormone treatment or having surgery to reverse the effects of transition”.

In my opinion, Brown University was wrong to remove the information about this study from their website. They gave two reasons for it. The first reason was the study’s poor methodology. There are thousands of other published studies with poor methodology, some of them with far worse methodology than this one, some of which have been eviscerated on Science-Based Medicine. Editors and peer reviewers could prevent the publication of fatally flawed studies, and journals can retract articles. But if an article has not been retracted by the editors of the journal, suppression by others is not the answer; who could we trust with censorship power and how could we be certain they were unbiased? Science is a collaborative process that requires transparency and open discussion. Brown could have simply added a statement to their website saying that the methodology of this study had been questioned and they could have provided links to the criticisms. Have they removed any other studies from their website on the basis of poor methodology alone?

The second reason was “concerns that the conclusions of the study could be used to discredit efforts to support transgender youth”. I don’t think evidence should ever be suppressed because of fears that some people might mis-use it. If a study shows that a disease is more common in a certain racial group, should that information be suppressed because it might reinforce racism? In my opinion, it was unreasonable for Brown to remove the study to appease those who objected for ideological reasons on one side of a very controversial issue.

Despite its flaws, Littman’s study is valuable in that it raises important questions. If even a handful of children are being unduly influenced by peer pressure and media, if dysphoria doesn’t always persist, if even a handful of treated people later feel the need to reverse their transitions, we want to understand what is happening. We want to try to find ways to better help each individual and to predict whose dysphoria will last. The high incidence of mental health issues in gender dysphoric patients is worrisome; is it possible that adequate treatment of those issues might resolve the gender dysphoria for some of them?

Transgender issues evoke strong emotions. There are transgender denialists who think gender dysphoria is delusional and should not be condoned. Some of those who accept gender dysphoria think it is socially determined; others think it is biologically determined. Some advocate gender transition treatments at an early age to minimize suffering and reduce risks like suicide; others advocate delay and caution. A subgroup of feminists, Trans-Exclusive Radical Feminists(TERFs), are strongly opposed to transgender identities, experiences, and rights. Some feminists see female-to-male transitions as surrenders to male oppression and believe that if society treated males and females fairly, there would be no reason for gender dysphoria to exist.

More and more people, children and adults, are reporting gender dysphoria and seeking gender transition; and if we are to serve their best interests, we need to know more. We can only know more through well-designed studies, which this is not. It has not even been established that ROGD is a meaningful category. I await further, better-designed studies with great anticipation.

There were some errors in the article as originally posted. WordPress inexplicably deleted the numbers to the left of the decimal point. They have been corrected.

2.7% had taken puberty blockers, not 7%
22.3% had been exposed to online advice about what to say to doctors to get hormones, not 3%
23.8% said doctors had offered puberty blockers at the first visit, not 8%
35.4% of natal females expressed their sexual orientation as heterosexual prior to announcement, not 4%
2.7% had been backing away from transgender identification, not 7%
62.5% had misrepresented information to the clinician, not 5%